This wasn't intended to be an excruciatingly self-indulgent idea; that part just sort of happened.

Here's how it started. I discovered this really cool stuff called Pastelbord, manufactured
by Ampersand Art. It's 1/8" hardboard, clay and gesso coated, with a marbledust finish, and it
will stand up to just about any technique you try. It's also a little on the pricey side, so I
bought the 3-pack of 5 x 7 panels, which is only like ten bucks, and used them to experiment.

At the same time, I was cleaning some stuff out of the basement, and found a stash of -- well,
we'll call it artwork -- that I had done when I was a little kid, five or so. At first, I got a kick out
of chuckling at the ineptitude of my former self, but the more I looked at some of the pictures,
the more I began to think I was better at some things back then. For example, stupid as it is,
this piece features better composition and brushwork than half the stuff I do now: 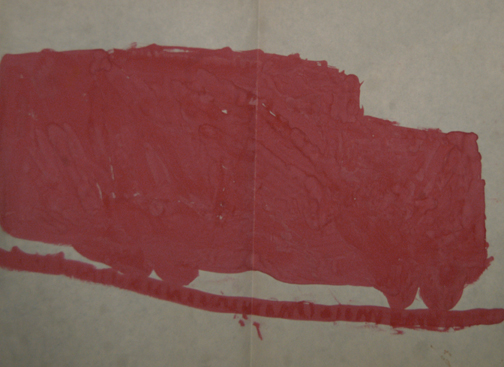 So I got the idea, seemed like it'd be fun, to experiment with the Pastelbords by recreating
some of my child's drawings. I copied the above picture and it came out like this: 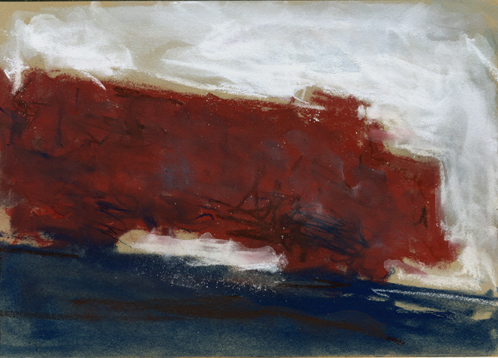 Fun, and sort of cute, but it wasn't really honest -- I was doing a take on the original picture, and
it looks like an adult with nothing better to do trying to make himself feel accomplished by doing
a heartless parody of a kid's picture. Which makes it even stupider than the original.

I tried another one, this time trying to hit the same attitude that the original had: without looking
at anything, I just started drawing a picture of a train, trying my best to make it look like what I think
a train looks like, and I got one that I kind of like: 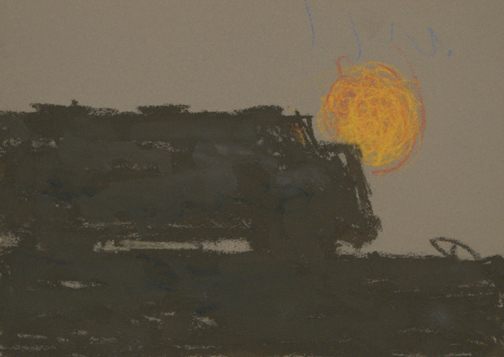 I think this one works. Just so you know, it's a Union Pacific diesel heading across the
New Mexico desert. Because I decided that's what it is, that's why.

Then I tried this one. Same rules -- don't waste any time deciding what to do,
simply draw the thing from memory: 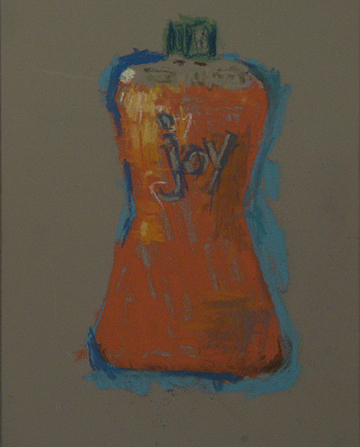 Again with the Regression Pastel, 5" x 7"

But I seem to have been remembering the present-day bottle of Ajax that sits
by the kitchen sink. I think, in this case, the original is way better. Check it out: 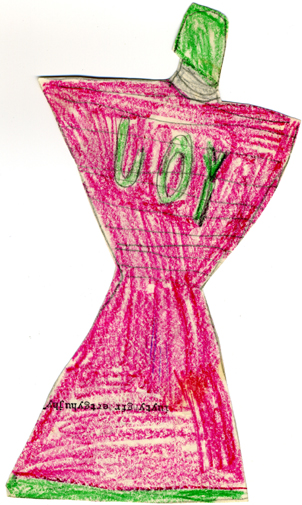 It's got a lot more clout. Get that backwards "J" -- very edgy material. And keeping
in mind that this was done about 1960, let me show you how ahead of my time I was:

By the way, it turns out that neither of my representations of a Joy bottle were accurate.
Remember these? 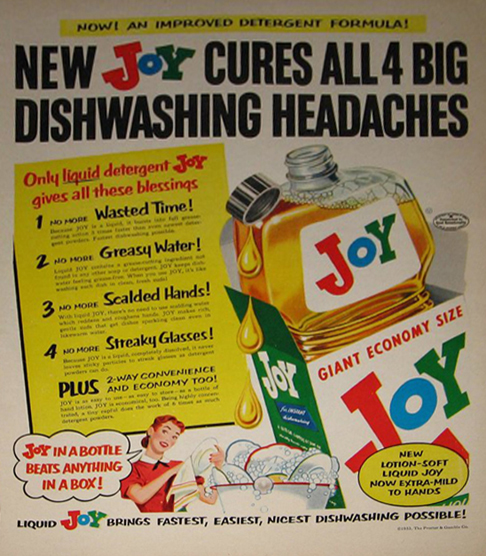 At this point, I (like you right now, no doubt) was ready to conclude this little exercise,
only I stumbled across this old picture: 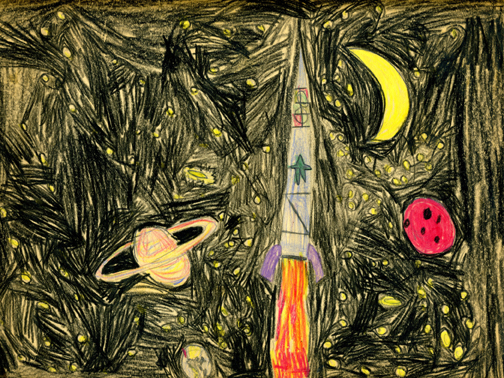 And I realized there was no way I could leave off here, without doing an outer space picture,
so I was obligated to amend one of my earlier attempts:

Okay, I'll leave you alone now. See you next week. In the meantime, here's a link that will
show you how you can make your very own outer space painting. From Cornell, where they
haven't yet discovered how to spell "tempera" -- but then, Cornell never did claim to be one of
your big art schools. What I found interesting, though, is the brand of detergent they specify.

Previously on Picture of the Week: