No, don't blame me. I'm not the one who came up with that title. I'll explain in a minute.

Technical difficulties, compounded by an ungodly schedule and the fact that the
one piece I tried was so bad I'll never let anyone see it, have forced me to bring you
something from the day-job side of things. So here's a project that I found interesting:

The client was (and is, for that matter) TiPTOE, a non-profit support organization for regional
filmmakers, and they asked me to design a poster for their upcoming 10 Hour Film Festival.
These things are done all over the country (although the time limit varies quite a bit from
one to the next), and they're an absolute hoot. Basically what happens is, you and your buddies
assemble a crew and whatever equipment you can obtain, and form a team. You show up at
the morning session, where all the teams learn three things that every film must include, and
then you have ten hours to shoot, edit, and deliver a short film that meets those requirements.

Anyway. The TiPTOE folks had mulled over the basic concept of the poster, and they came
up with this slogan, which naturally led to the following visual: 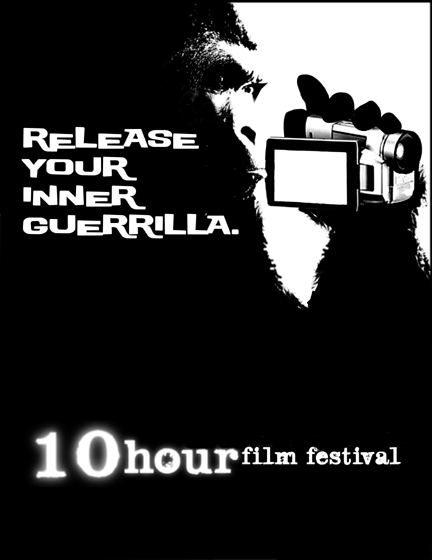 That idea evolved (hey, that's pretty good, you know? Evolv -- skip it) into this one.
Wish I could tell you the next treatment was all my idea, but alas, no: they came up with
the basic concept. Note that the spelling has changed from "guerrilla" to "guerilla."
The preferred spelling is with two r's, but it just looked wrong, so we voted for the one-r version.

I think this one's very clever in that it tells you where the festival's located, in a way that's
simultaneously subtle and loud as all get-out. That is, if you're up on your
second-tier landmarks: 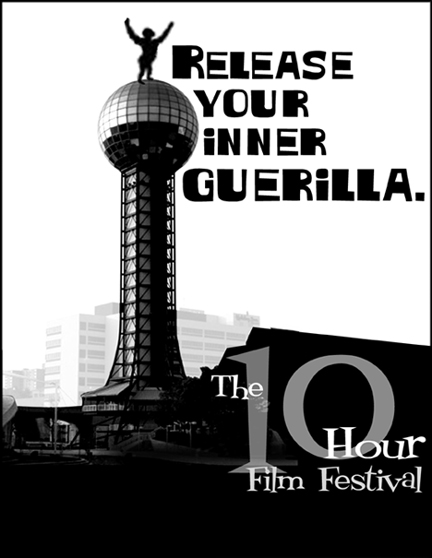 And then a momentous moment happened -- I came up with a third idea, submitted it to them,
and for the first time in my life, the client went with the one I liked: 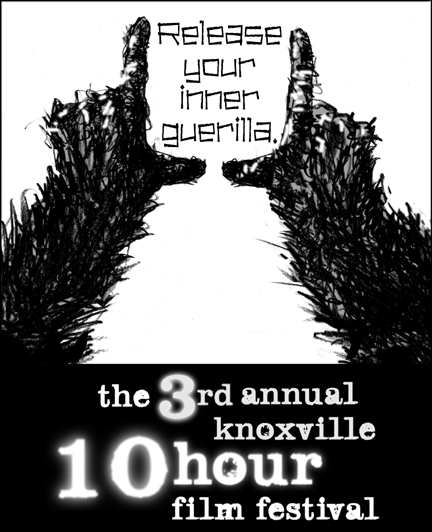 If you're anywhere near, you should consider participating in the festival, or
at least attending the screening, which is open to the public. I don't think they
have it up yet, but the TiPTOE web site will soon carry all the details.

Oh, yeah. About that title. That comes from the subject line of an email from
Paul Izbicki, TiPTOE's president and the man who, in addition to brain-hurting
turns of phrase like the above, sends me, from time to time, links like this.
Or, forgive me for what I'm about to do, this.


Previously on Picture of the Week: