Bear with me as I experiment for next few weeks; I'm fooling around with some ideas for making this feature a little
more seasonal, more elaborate, and generally more engaging, and after some back-and-forth I decided to try the new title
as part of the rebranding effort. I even have a slogan: Not a sketchbook...Not a diary...Hell, it's not even a rebus!
Well, I mean I've heard worse. Okay, I'll keep working on it. All I want is for you to be happy.

Meanwhile, this monochromatic entry. I've been doing a bunch of little sketches of birds lately -- the ones you see here
are actual size, or close enough -- partly because it's a great drawing exercise that forces you to get an impression down
very rapidly since they flit about so much, and partly because I thought it might lead to an interesting painting, all these
tiny shapes silhouetted against a drab sky, something that you had to stare at for a few moments before you realized
what it was. (How's that for talking a picture to death before it's begun?)

I tried several with the natural setting look, like: 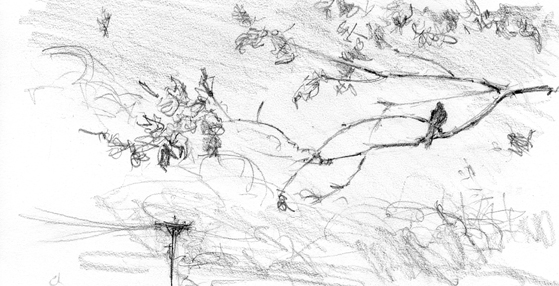 But I kept drifting back to the telephone lines (or power lines, I can never tell which is which), mainly because,
as you see above, unless you've driven or hiked for hours into the middle of nowhere, you can't do a landscape
that doesn't feature them. And besides, the above sketch looks more contrived to me than this: 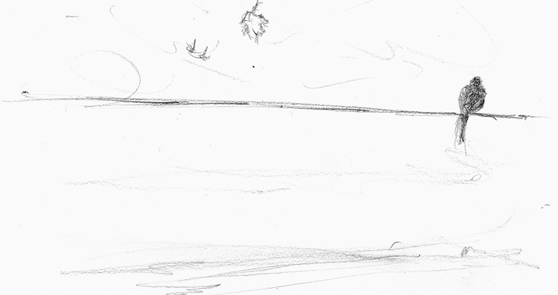 I bet it strikes most people my age or younger more natural to see birds perched on phone lines than branches.
I'm certain, by this point, it strikes the birds as more natural. Not that I'm complaining about that --
wires are so much easier to draw than tree limbs, it's not even funny.

I'm sorry. All this has been beside the point. Here's what I originally wanted to to tell you about. It was around
the time that I drew this one... 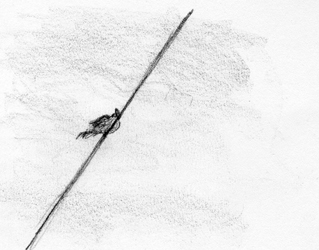 ...that I began wondering if I had waited too late in the year, and had missed what I wanted to capture: the sight of
a flock taking a break from that quintessential Autumn image, the southward migration --

And it hit me just like that: the geese. What had happened to the geese this year? For the first time I can remember, I
hadn't seen nor heard them. Every October, they would fly over, zeroing in on what used to be a field with a big stagnant pond,
and is now a development called Hunter's Lake. For a while, it was a great arrangement all around -- the developers drained
the pond, then put it back in with fountains that drastically decreased the mosquito population in my neighborhood, and the
geese loved their newer, classier winter digs. But last year, I've since found out, the residents at Hunter's Lake (Hunter's
Lake, where do they find the people that think of these...ahh, don't get me started) decided they'd had about all the
nature-communing and crossover-washing they cared for, and they took steps to run the geese off. Which apparently
worked. My poor geese. A pox upon all their McMansions, I thought, and a few nights later, that feeling
combined with something else I saw, producing an idea that resulted in this: 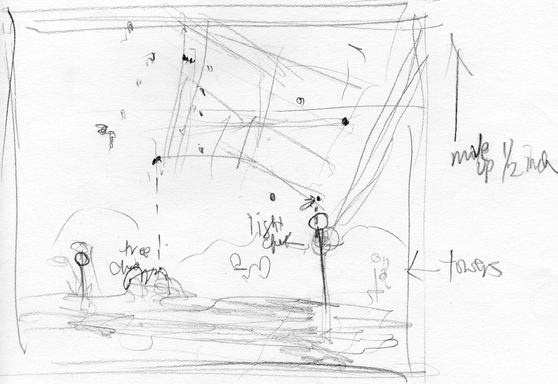 I'll explain more next week, when you'll see, at the very least, a more developed version of the above. And
if you can figure out what this sketch is supposed to be, send me your name and address and I'll mail you a dollar.

Mind you, if some guy had bought that field with the pond and, instead of Hunter's Lake, built something like this,
I would gladly sit over there in a blind with a flame thrower, just waiting to chase those airborne interlopers away.