Saw this, and instantly thought of the title: Artificial Deer. By the time I got home,
I had come to realize that Lawn Deer was much better. Two days later, when the list
of titles I'd been jotting down culminated in Bamboid, I figured that it was time to
quit stalling and start the picture. Below are three stages it's gone through. 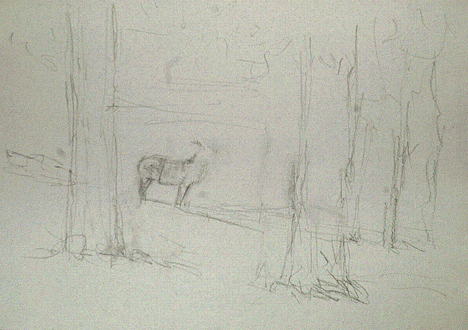 I decided to use acrylic washes to tone the background before I began with the pastel,
so I quickly sketched the composition in pencil, even though that's a practice I normally
rail against. If you look about the middle of the image you'll see a smeary vertical line
where I missed the placement of the closest tree -- and then, for some reason,
tried to erase it. Like anyone's going to see it 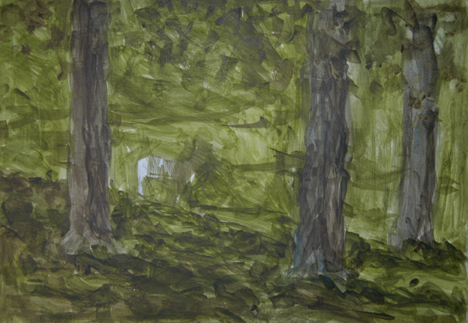 Here's the acrylic underpainting. Very loose; I wasn't worried about getting anything
anywhere near exact. I just wanted to get a background against which I could judge
light and dark values later. 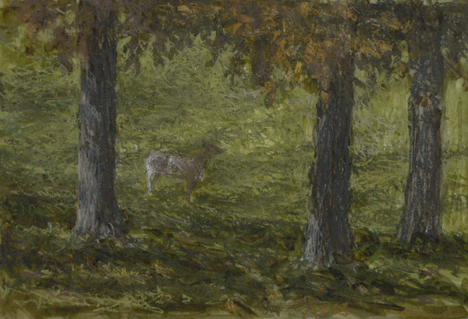 Here I'm about halfway through, I'm guessing. This is the point where I'm thinking,
just wanted to get a background against which I could judge light and dark...
give me a break. Why didn't you draw the deer more accurately to begin with, idiot?
Ah well, I'll work that part out. Next week, we'll see how it turns out.

Oh, yeah -- this picture held me up on the the Volkswagen picture I promised
last week. We'll check in on that one as well. See you then.